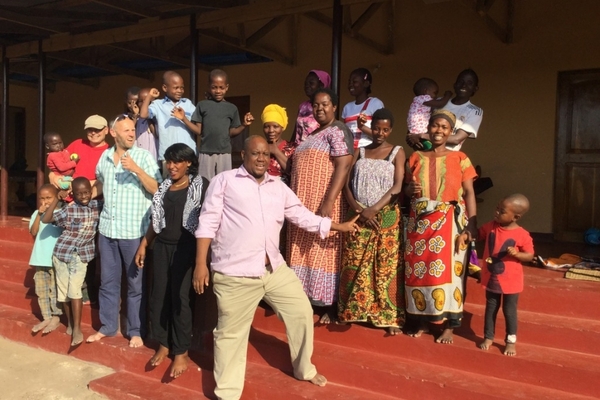 Is Swahili for a "Garden of Humanity". To create a community for HIV/AIDS survivers worthy of that name is VALITA's dream.
Projects Projects in Tanzania Bustani ya Binadamu

The story of an emerging partnership

It was in November 2010 that RfLUK first had contact from Dominic Malesa , the secretary of SAHU the "Society for the Advancement of Humanity" , now VALITA ( Value Life in Tanzania) at Dar es Salaam in Tanzania. Dominic is one of three founder trustees who had all studied philosophy together in Harare and who then returned to their homeland with the wish to dedicate their lives to looking after orphans, widows and grandmothers whose menfolk had fallen victim to HIV AIDS.

Once all the references supplied to RfLUK by SAHU had checked out very positively, a deputation from RfLUK went to Dar es Salaam in July 2011 to meet the trustees and witness their outreach programme for themselves. The feeling of empathy and a common cause was immediate and grew stronger every day during the four-day visit.

During the lively conversations held in SAHU's one roomed office, it became clear that the SAHU team's dream was to find some land outside the city where they could bring together a majority of the people in their care. The vision of creating a haven where they could all look after each other, provide craft training, grow vegetables and keep animals, was one that the RfLUK team were keen to support.

The advantages of this vision were obvious and the ensuing discussions led to a joint commitment to work together towards turning this dream into a reality. With incredible good fortune, one member of the delegation was able to identify a donor who pledged a sum of money towards the purchase of a plot of land, the drilling for water and the construction of a first building, which got the project started. We named it 'Garden of Humanity' or 'Bustani ya Binadamu' in Swahili, and the dream was born into reality.

The first stage of the project

SAHU had found a potential site in late 2011 and the land was purchased on the 29th November 2011. The site consisted of 5 acres and a first bore hole established that there was a good supply of accessible ground water.

By November 2012 funds had been raised to install a new water pump. A caretaker, who could live on the site was found, a hut was built for him and his family and so the land could be kept secure and management of the grounds could start.

The purchase of the land, the completion of the bore hole and the installation of the first hand pump absorbed all of the available budget at this time and new fundraising became vital in allowing us to continue to support the fledgling project and develop our plans further.

2013 saw the return of the RfLUK team which this time included Percy Mark, Paul Cockhill and his son Alex. It was necessary to cut sight lines through the dense shrub, survey the land, take measurements of the levels, assist with clearing the first key areas of vegetation and discuss the best use of each area in the 5 acre site.

The land-survey allowed a site plan to be drawn up by the beginning of 2014 and there were many planning and costing conversations between the teams until the final plan was agreed.

At the beginning of 2014 it became clear that the SAHU team needed help with transporting volunteers and materials to and from the site, especially in the rainy season. In June 2014 with a generous donation from our secretary, Joy Sheppard, and the expertise of Paul's son Alex, a 4x4 truck was sourced and sent out to Dar es Salaam (which was found to be the cheapest option). The site could now be accessed much faster, which made the continuing works considerably easier for the SAHU team on the ground.

In October 2014 RfLUK made further trip to Tanzania to discuss the final plans. Funds had been secured to build the first building on the site and Percy Mark had built a scale model to show the local builders how the construction would work. A final land survey was completed and local authority permissions was sought. The team found a project manager with local experience and building materials were sourced and costed.

In July 2015 building work began and was completed in record time by the end of November of that year. It was a truly inspiring experience to see the photographs as they came in over the summer and autumn months and to witness the total dedication of everyone involved on site to bring this dream to life.  An above ground water storage facility and a mechanical water pump powered by a generator were added, providing water pressure for the bathroom facilities, ready for the first residents.  A huge underground water storage tank was constructed to collect rainwater during the rainy season as a resource during the dry season.

In December 2015 the first families arrived at Bustani ya Binadamu and moved into their new home. It was a momentous occasion and a wonderful Christmas present for everyone who had been involved in the project to date. Although the outside areas were not yet completed, the sense of joy at having reached this stage was palpable across the 1000's of miles and plans were made for the 2016 trip which was to move things forward in several new directions. For more on this project, please see the Mbopo Water project update.