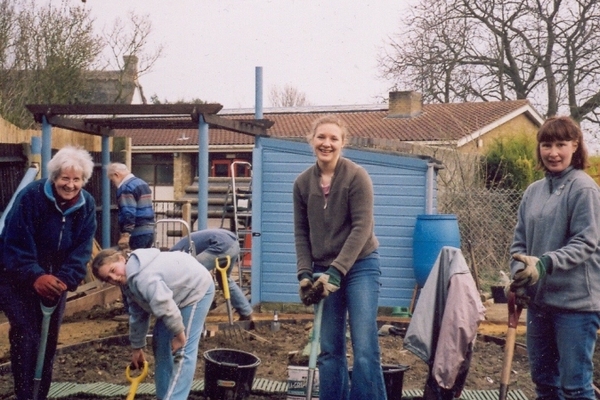 The Reverence for Life Garden

RfLUK helped the children of a primary school in Hertfordshire in the UK turn a piece of derelict land into an award-winning Garden.
Projects The Reverence for Life Garden

Wrestlingworth Primary School gets a Reverence for Life Garden

As a consequence of this project many children of this Hertfordshire School have become keen gardeners and have encouraged both their parents and teachers to help tend and enjoy looking after the vegetables, flowers and fruit trees during the long summer holidays. The garden has become a teaching resource in which children can re-connect with nature through 'hands-on' experience.

When Franziska Murray, mother of two daughters and a long-time enthusiastic supporter of the philosophy of Reverence for Life went back to teaching, she immediately began to build aspects of this philosophy into her curriculum for the five to seven year age groups in her charge. With strong support from the Head Teacher, Mrs Curry, she developed the idea of revitalising a neglected piece of land next to the playground by transforming it into a garden as a teaching resource to help  children and parents confront issues which Reverence for Life tries to raise in a positive and practical way.

Franziska's father, retired architect and chairman of RfLUK, was asked to help draw a plan for discussion with the children and they were encouraged to draw their own ideas. These were then incorporated, resulting in major modifications of the original plan.

The Plan and its implementation

The children all wanted curves and circles, so the final design included a central planting bed in the shape of an ellipse. One cold November morning in 2004 the design team including some of the children gathered on the plot to start setting out the tricky geometry with white pegs, string and bags of flour.

After Christmas, materials were sourced with generous discounts from local suppliers, working weekends were scheduled for trustees and supporters of the charity as well as parents and teachers and, undeterred by rain, frost, biting winds and snow, work progressed at a good pace. Construction work proceeded with shovel and spade, mallet and saw, paint brush and trowel and some very muddy boots.

The charity donated £500 towards the cost and the children designed a poster of the garden plan which was entered into a local competition. They won the second prize worth £250, all of which helped the project towards its target. Some generous supporters of the charity gave further donations for specific items like a small fountain, a stand for a white board, pin board and specimen collection shelf, a hedgehog house, five fruit trees and many essential items like watering cans and gardening tools. By the time the garden was officially opened in May on the occasion of the charity's AGM held that year at the school, the children had already organised a stand in the playground selling the first produce to parents, teachers and supporters.

By the middle of the Autumn term the children's produce had provided many a school lunchtime soup and produced a small income for the purchase of seeds for the following year. And so it has continued ever since.

A garden bench has been donated  inscribed with the following quotation by Albert Schweitzer:

"How often did I say to myself: there is far more going on in a child's heart than it will let you guess."

For some children, pottering in the garden can be the highlight of the day!