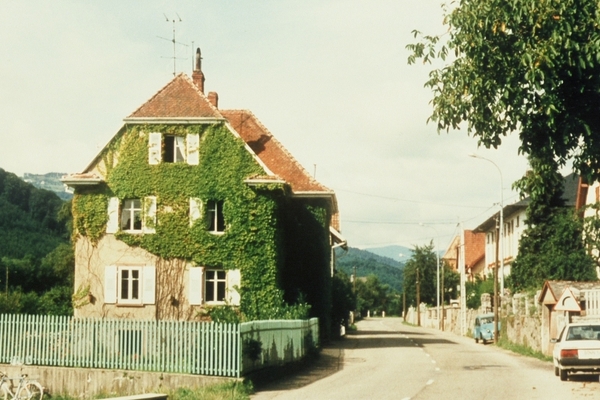 After Schweitzer's death his European home became a museum and archive which has received support from the British Fund over the years.
Projects Maison Schweitzer at Gunsbach

The Maison Albert Schweitzer was Dr. Schweitzer's European home and office where he worked at his writings, planned his European lecture and organ-recital tours and housed a skeleton staff to manage his European affairs.

It was here that medicines and other essential supplies were sourced and organised for shipment to the Gabon and it was also here that both domestic and medical volunteers were interviewed and briefed before they ventured out into unknown Africa. When Vreni Mark  (then Vreni Burkhalter) answered the call for a new housekeeper and catering manager for the Lambarene hospital, this was the door bell she hesitantly rang and this was where she received her final instructions regarding what to expect and how to conduct herself in Africa .

It was here that Schweitzer worked on many of his theological and philosophical  books during his intermittent sojourns in Europe, when not on his fundraising lectures and organ recital tours. (The funds for Schweitzer's hospital at that time came exclusively from the sale of books, from his concerts and talks and from private donations gather by an extensive circle of friends all over the globe. He never accepted financial assistance from any government- or other official sources.)

The house was built from the money he received on winning the Goethe Prize, which he was awarded in 1928 . The building work was completed in 1929.

Schweitzer died in 1965 at the age of 90 and was buried at Lambarene.  Shortly after that, one of his two loyal personal assistants, Mlle Ali Silver came to live in this house and began the huge task of cataloging all the correspondence and photographic material to establish the beginnings of an archive of Albert Schweitzer's legacy. Thus the house became a museum and archive where regular seminars, discussion groups and organ master classes were organised and the British Fund has given both personnel and financial support towards its management and upkeep over the years.

In 1984 Vreni Mark, then acting as  interpreter for Dr. James Witchalls who was president of the AISL (International Albert Schweitzer Association) began to assist Mlle Ali with the organisation surrounding the master classes that were held each summer. When Mlle Ali's health began to deteriorate this assistance expanded into all aspects of the running of the house, and when Ali Silver died in 1987, Vreni was asked to remain as directrice. But since Vreni could not move permanently to France, after two years Mme Sonja Poteau, who had also been in Lambarene and had helped Vreni during the previous two years, agreed to take the position over from Vreni. Sonja and her husband, Robert, remained in charge of operations in Günsbach for the next twenty years.

Now the House is the Seat of the AISL

During those years, two further buildings in the village of Günsbach were bought and the Maison Albert Schweitzer became the official and permanent seat of the AISL. Nearly all Annual General Meetings of the organisation, at which RfLUK is permanently represented, are held here.

Under the current directorship of Jenni Litzelmann and her husband, and with the close attention of the current president of the AISL, Christoph Wyss, the archive grows and visitor numbers rise. As regulations regarding access to public buildings in France became more demanding, a decision was taken to build a major extension into the garden of the house to solve the accessibility problems, provide better accommodation for the museum and for more extensive public meeting spaces. Fundraising proceeded apace and the building project was completed in Spring 2020. (At the time of writing, the Corona virus pandemic has delayed the official opening from taking place). To read more about the current museum development at the Maison, please follow this link.