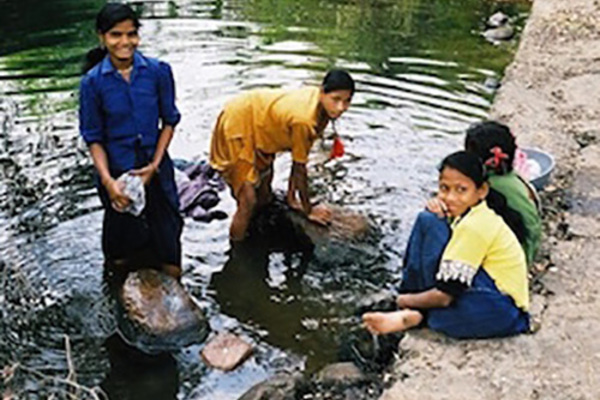 At this community of lepers an attitude of Reverence for Life is as self-evident as the air they breathe.
Projects Anandwan in Central India
Percy Mark's report on the Anandwan visit in 1999
PDF (66.9 KB)
Download

This is the name that was given as a huge leap of faith when Baba Amte arrived with his young family, a cow, a dog and 6 lepers at the piece of waste-land that had been offered by the local government to this disinherited Brahmin who had the temerity some fifty years ago to start a community for the care and rehabilitation of Lepers in Central India.

The young man who was later to be called Baba Amte, was the son of a wealthy landowning Brahmin family. But he was a rebel from an early age and soon began to pit himself against his strict Father and the cast privileges of the Brahmin way of life. As a young lawyer only recently married, he held a position in local government at Warora. When the 'untouchables', whose task it was to empty the latrines every morning, complained of their lot, he encouraged them to strike. Then, in response to a challenge he shared their lot, emptying latrines and carrying the contents on his head for many months. One day during a heavy downpour, he saw what looked like a bundle of rags on the other side of the street. On investigation, he found it was a leper lying there close to death, unable to move. He recoiled and ran home. But he had a developing reputation, acknowledged by Mahatma Gandhi, of being "the fearless seeker" and pacing up and down in his living room, he reminded himself that he had never run away from anything in his life. He went back, built a palm leaf shelter for the man, bedded him down and nursed him as best he could until he died. At this point, he had already renounced his inheritance but he knew well, that this act would cause a huge uproar in both his own and his wife's Brahmin families. Indeed, before the week was out they were excluded from any further contact. Only his young wife supported him in his convictions and dangerous endeavours. Within weeks, as news spread, more and more lepers appeared, seeking refuge.

He closed his law firm and took a 6 months course in Calcutta on the medical treatment of lepers. Then the young family set off together with the lepers to find the piece of land which he had managed to extract from the Local Authority. The party consisted of his family, now including two small boys, 6 lepers, a cow and a dog. When they reached the land, they found that it was a disused road-stone quarry, as shown in the picture above and there was no water supply or well. For days they desperately dug for water and eventually found it some 30 feet below the surface. Thus Anandwan was born and Baba Amte vowed, that he would never turn anyone away who came to him in need of care.

Percy Mark, then the new chairman of Dr Schweitzer's Hospital Fund in search of a suitable project which the charity could support in an English speaking 'developing' country, came to Anandwan for the first time in 1989. He found a thriving, verdant, "Garden Village" as the center of a dispersed community of some 5000 lepers and helpers in a dozen different locations within a 300 km radius, near Nagpur in Central India.

The Community had two hospitals, numerous weaving and engineering workshops, schools for blind as well as deaf and dumb children, craft studios and technical and agricultural colleges. There were farming activities which rendered the community self sufficient in cereals, dairy products as well as manufacturing activities that were producing over 1000 different products for sale. Most of these products were largely centered around the recycling of plastic waste material which was collected from surrounding roads and villages using specially designed and self manufactured tricycles. All of this work was executed by cured lepers, who still needed regular medical attention because the affected limbs, where nerve-ends have died, are subject to superficial damage and infection.

A growing community full of wisdom

Baba Amte and his wife Tai were not at Anandwan when Percy Mark visited there in 1989. They were living on the Narmada river, in the flood plain at the site of a huge dam project. They were protesting against its construction and lack of proper provision for the 300,000 villagers living in the area who would be flooded out. As a personality of national fame by then, he hoped to be able to force the government's hand by putting his own and his wife's life at stake. He had left the running of Anandwan and of the large hospital and school in the remote area of Hemelcasa in the hands of his two sons, both of whom had studied medicine.

The degree of wisdom, environmental awareness and sustainability being practiced in these communities was astonishing. It was Baba's first principle that dignity is derived from constructive, creative activity and the ability to make a contribution. It was therefore uppermost in everybody's mind, no matter how disabled they might be, that a task was found for them and that arrangements be made for them to work in some way or another. There seemed to be no limit to the ingenuity which came into play towards this end.

The degree of wisdom, environmental awareness and sustainability being practised in these communities was astonishing. It was Baba's first principle that dignity is derived from constructive, creative activity and the ability to make a contribution. It was therefore uppermost in everybody's mind, no matter how disabled they might be, that a task was found for them and that arrangements be made for them to work in some way or another. There seemed to be no limit to the ingenuity which came into play towards this end.

There was no private ownership anywhere. All was owned by all, and all needs were met from the common pot. The administration lay in the hands of a Board with charitable status and everyone contributed according to their abilities. It would be hard to exaggerate the happy atmosphere that pervaded throughout this community.

By the time of Percy's second visit in 2003, this time accompanied by his son James (now the current chairman of RfLUK) and his girlfriend Felicity (now his wife) the community had grown to some 10,000 participants in 26 different locations and apart from the agricultural, educational and medical activities, the frontiers of environmental sustainability were being pushed to limits that Percy had not seen anywhere else.

In order to save timber - a very precious commodity in those parts - a special form of construction had been developed using vaulted roofs made of single skin brickwork. The bricks were made of local earth and a minimal amount of cement which was cured under water to overcome the problems of excessive heat. In order to reflect heat, the vaulted roofs were covered with a layer of fragmented broken glazed tiles (obtained as waste material of nearby industries). Small dams were built from salvaged car-tires in order store water throughout the dry season. Methane for cooking was produced in sewage tanks and solid human waste was composted for use on fields as manure. A strict and 100% vegetarian diet was helpful in that respect. The list goes on and on.

We do not know of a place where the spirit of Reverence for Life is as much in evidence and practised so naturally and completely in the activities of a community, as that of the daily life which we encountered at Anandwan.

For a full description of the experiences of our visits view the attachment below.

For up to date information about Anandwan go to anandwan.in