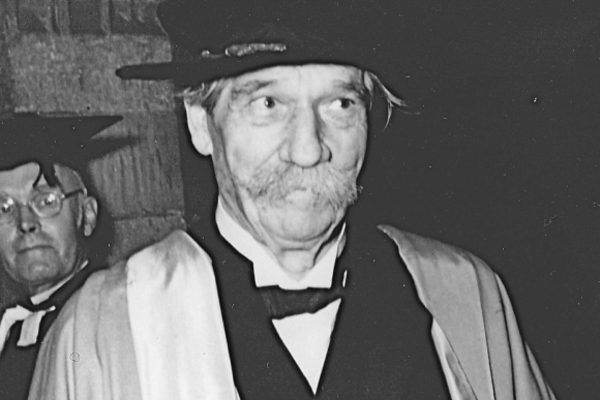 Relationship with the British Isles

In the early 1920s Dr. Schweitzer set up the UK 'Fund' to help support his hospital in Lambarene. Out of this grew RfLUK.
About Albert Schweitzer Relationship with the British Isles

Albert Schweitzer’s legacy to humankind can be seen as having three aspects:

1. The example he gave us of a person who took stock of his life as a young man and made a decision to give up a promising academic career to take up a life of active service to Africa and to humanity.

2. The legacy of leaving his mark on two places, the hospital at Lambarene and the Schweitzer House at Gunsbach, both of which bear physical witness to his life’s work.

3. His written work and especially his ethical philosophy of Reverence for Life, which at the end of his life he himself regarded as the most important of these three.

It is to this third aspect of his legacy that we in the UK have directed our main focus in recent years.  Specifically, we have focused on the question of how this philosophy can engage with the most pressing problems of our present time.  A century ago Schweitzer identified the dangers and pitfalls of the direction in which western civilisation was moving and foresaw the life-threatening consequences if a change of course did not occur.  He worked tirelessly to find something that would provide the energy and the will to turn the rudder in order to steer the ship into safe waters.

The phrase “Reverence for Life” (Ehrfurcht vor dem Leben in German) came to Schweitzer as the key that would unlock that energy and release the rudder from its fixed position. As Schweitzer said, each generation must find that key afresh for itself.  Our generation may have need of this more than any that has come before.

This then has been our main preoccupation in the British Schweitzer Committee:

“Can the ethical philosophy of Reverence for Life help us to turn the course we are on toward a sustainable direction?  Will it be possible to accomplish this before it is too late?

What was Schweitzer’s relationship with Great Britain?

Apart from his reading of UK authors, Albert Schweitzer’s first known connection with the British Isles was in 1899 when, at the age of 24, he declined the offer of a scholarship in favour of another more needy student, to do part of his licentiate studies in England.  When his friend and future wife, Hélène Bresslau, spent a few summer months in England in 1905 rubbing shoulders with missionaries who had returned from the Congo, she was shocked by talk of the conditions there.  She wrote to Schweitzer at length about it and the young couple’s correspondence shows that a strong connection with England was established.  By 1907 Schweitzer’s radical new theological ideas were vehemently discussed in Oxford and Cambridge and are reported to have cast a shadow over that year’s Church Congress.

However, it was in 1922, after their first period in Africa, that Albert Schweitzer visited England for the first time and gave talks in London, Oxford, Cambridge and Birmingham where he played the organ to enthusiastic audiences.  When he left again for Lambarene in 1924, he was accompanied by Noel Gillespie, a young Englishman from Oxford as his only companion because his wife was not well enough to join them.

In the Autumn of 1925 the Dr. Schweitzer’s Hospital Fund in the UK produced its first “British Bulletin” announcing a council of 20 members among which were five bishops, a dean, and five other clergymen, a strong statement of interest and support at that time from the Church of England.

In 1927 Mrs. C. E. B. (Lilian) Russell, a doctor from Scotland, joined Schweitzer in Lambarene and helped mainly with construction work and establishing an orchard. When Schweitzer returned to Europe in April of that year, he was able to leave her in charge of those teams of workers.  She later became one of the translators of Schweitzer’s books into English.

During 1928 Schweitzer again toured England giving talks and concerts, leaving behind a strong circle of friends and supporters. In 1934 and 1935, the famous Hibbert and Gifford lectures took place in Manchester and Edinburgh accompanied by numerous organ recitals and the recording of Bach’s organ music by Columbia in their longest recording session to up to that date.

Schweitzer spent the whole of World War II (1939-1945) in Lambarene.  The British authorities helped Hélène to join him there in 1941, and the British press helped to celebrate his 75th birthday, referring to him as “a saint of our century.”  However, it was in that era that the first attacks on the philosophy of Reverence for Life also made their appearance on the bookshelves.  Shortly after Schweitzer received the Nobel Peace Prize in 1952, the respected journalist James Cameron was sent to dig up what he could find about the “saintly” man. Although Cameron liked him, the papers were determined to have their 'story' and called the hospital a “slum’” and a “vehicle for his ego.”

When Schweitzer started to speak out about the dangers of atmospheric atomic tests, some British papers took up the cause and in 1955 he was awarded the Order of Merit by the Queen and honorary Doctorates were bestowed at Edinburgh, Oxford, and Cambridge Universities.  Personalities like the philosopher Bertrand Russell, the musician Vaughan Williams and the painter Augustus John queued up to see him in the restaurant of his friend Emil Mettler, located in Petty France, London.  When Schweitzer died in 1965, a service of remembrance was held in St. Paul’s Cathedral and headlines like “A Life Devoted to Humanity,” “Saint of Lambarene,” and phrases like “… the almost unattainable ideal of the complete man, perhaps more than anyone in this modern age” appeared in the British press.

Dr. Schweitzer’s Hospital Fund (DSHF), consolidated by Trust Deed in 1959, continued to administer Schweitzer’s Sterling Account, which had accumulated during his lifetime.  Under the Chairmanship of Sir Clement Chesterman, it purchased land adjacent to the “Old Hospital" in Lambarene on which a new hospital was then built in 1981.

At that time, the AISL held its annual meetings in a different European country each year in conjunction with three-to-four-day seminars at which Schweitzer’s legacy was discussed. In 1983 the meeting took place at St. John's College in Cambridge University at which 150 delegates from 21 countries attended at the invitation of the British Schweitzer Committee.  This event was organised by Dr. Witchalls and Vreni Mark, who also acted as Dr. Witchalls’ secretary and interpreter until she began to help Mlle Ali Silver with administrative work at the Maison Albert Schweitzer in Günsbach during the summer months. When Ali died in 1987, Vreni took over the management of the Maison Schweitzer until she was succeeded by Madame Sonja Poteau in 1989.

During the 1980s, much of the available energy in England was being devoted to affairs in Europe and activities of the British Schweitzer Committee were reduced to a minimum. When the BBC, caught up in the media's frenzy of toppling heroes and idols from their pedestals, showed a series of films in 1994 with that aim, Schweitzer was the first victim.  As a result he was dropped from the school curriculum as a person to be studied by children and awareness of him virtually disappeared from public consciousness.  Not so the core of his philosophy, however, which, as he had hoped, made its own way in the world and inspired much of the thinking in the early days of the environmental movement in the UK.  Rachel Carson dedicated her famous book “Silent Spring” to him.The concept of Reverence for Life appeared again and again in such reputable journals as “Resurgence” and took many different directions, including the formation of the central idea in the final paragraph of the Earth Charter.

When Percy Mark succeeded Dr. Witchalls as Chairman of the British Schweitzer Committee in 1995, it became clear, that the objectives defined in the Trust Deed were too narrowly formulated to allow money to be spent on promoting the philosophy as well as supporting hospitals that were “managed in the spirit of Dr. Schweitzer.”  We therefore created a new charity, first called “Friends of Albert Schweitzer (UK)”, but which now calls itself “Reverence for Life UK” incorporating DSHF.

Events which were called "Schweitzer Days" were organised, at which we discussed such topics as “Reverence for Life in the Workplace,” “The Earth Charter: Will it work?,” “Ethics and the Media,” “The Film: An Inconvenient Truth,” and other timely topics.  We have converted some derelict land into a “Reverence for Life School Garden” at a primary school where one of our members teaches and where Reverence for Life has been adopted as the school’s motto. Members have given talks to children and students ranging in age from 4 to 18 years and to societies as diverse as Woman’s Institutes to village hall gatherings and the Anglo-German Society in a Methodist Hall.  The Hospital Fund continued to provide financial support to the Albert Schweitzer Hospitals in Lambarene and a Leper Community at Anandwan in Central India until the beginning of this century and continues to support the Maison Albert Schweitzer in Günsbach as well as the AS Hospital in Haiti.  Since 2010 a partnership has been formed between a small charity in Tanzania then called the "Society for the Advancement of Humanity" (SAHU) - now renamed "Value Life Tanzania" (VALITA) - which jointly works towards the creation of a new community for HIV/AIDS survivors and others with disabilities called the “Garden of Humanity”.

Since 2002 we have an extensive and informative Website , which was redesigned for the second time in 2016 and once more in 2020.  During the last decade 13 Newsletters have been written which can be seen on the Website, and “Bulletins” have been published in 1998 and 2003. A translation of major sections of Albert Schweitzer’s last philosophical work: Volume III of his Philosophy of Civilisation has been completed and published in 2020 by NESt Publications as Book Two: The World-View of Reverence for Life - part of a trilogy by Percy Mark under the title: “Towards Humanity's Next Evolutionary Step”. (Book One is called Lanya's Journey, and Book Three: My Path with Albert Schweitzer). This forms an integral part of an educational program which bares the name: The NESt Initiative. In addition, a series of self-published booklets of stories and presentations has been started . The first four are currently available for purchase by contacting us directly.

The Charity has had some 45 members during recent years but has now changed the status of ‘Membership’ to that of ‘Supporters’ and welcomes anyone interested in taking part or just in being informed of our activities and giving donations towards them.

In the summer of 2016 Percy Mark stepped down as Chairman and was succeeded by his son James Mark, heralding in a new era for the Charity.