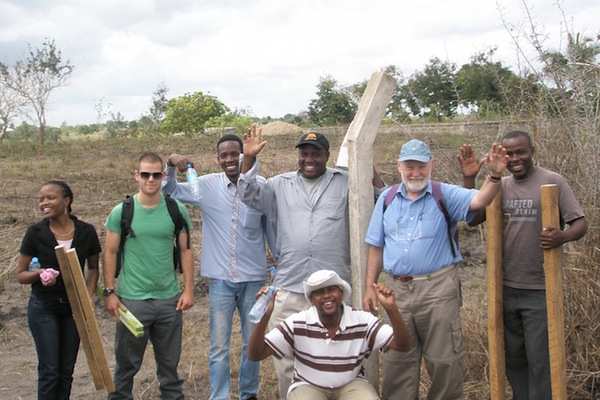 Dr. Schweitzer's Hospital was located in the Gabon, Central West Africa. RfLUK now works in partnership with SAHU in Tanzania.
About Where we work Africa

Dr. Schweitzer's Hospital was located near a town called Lambarene on the river Oguowe in the Gabon, formally a French colony in Central West Africa. RfLUK now works in partnership with the "Value Life in Tanzania" (VALITA) in Tanzania.

The picture shows the partnership in action during our first visit to Tanzania to survey the land which we helped SAHU to buy. The project has come on a long way since then and you can learn more about its progress here.

The need for change

The "Equatorial Africa" region is one of the poorest on the planet and also one of the most severely affected by climate change. Its economies are not growing as fast as in other parts of the world.

In the summer of 2015 Reuters reported that Nestle had announced that it was scaling back its commercial activities in 21 countries of that region because, as their spokesman told the Financial Times, "....we have realised that the middle class in this region is very small and not really growing....". A number of other global brands are following suit.

When, in 1913, Dr. Albert Schweitzer went to what was then French Equatorial Africa (now the Gabon), it was not to alleviate poverty, but to give something back. Schweitzer felt that as a European who could alleviate suffering as a doctor, he could offer some recompense for the exploitation and inhuman treatment which the indigenous population of that region had suffered at the hands of Europeans in the past.

As things turned out, the Gabon, whilst still harbouring a huge percentage of its population in poverty, is now one of the richest countries of the region.

Reverence for Life and Africa

Until recently, RfLUK supported Dr. Schweitzer's hospital in Lambarene in a small way,  whilst seeking a suitable project to support in an English speaking part of Africa where there was even greater need for assistance.

This was found in 2011 in Tanzania, where our African activity is now concentrated and where our partnership with SAHU has become the main focus.  You can find full details of these ongoing developments under the Project pages.

To demonstrate "need" in the “disadvantaged” areas of Tanzania we quote a few published statistics:

In the 2010 Multidimensional Poverty Index, (MPI) Tanzania had an index of 0.332, with 65.6% of the population ranked as “MPI-poor” and 33.4 % in “severe poverty” (compared to 6% MPI-poor in Turkey and 5.5% in Egypt). Whilst the region of Dar es Salaam is not the poorest in Tanzania (with 26.7% ranked as MPI-poor), Dar es Salaam has extensive slum areas with very high concentrations of  ‘MPI-poor’ living in close proximity.