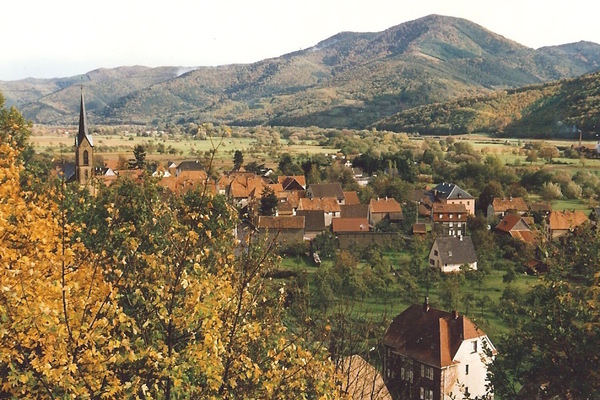 The story of Reverence for Life UK begins in Dr. Schweitzer's home village of Günsbach. Now RfLUK engages in numerous projects in the UK.
About Where we work Europe

The picture shows Dr. Schweitzer's European home in the small Alsatian village of Günsbach near Colmar in France.

The house in the foreground, now a museum and archive open to the public and called the "Maison Albert Schweitzer", was built there for him as his European home. To find out more about the museum click here.

Further significant European projects carried out by RfLUK in England in 2005 were the creation of a "Reverence for Life Garden" on a derelict piece of land belonging to a Primary School in Hertfordshire and our work in support Julian House Homeless charity and the Bumble Bee conservation Trust as well as the Next Evolutionary Step (NESt) Initiative and events and on-line inspirational initiatives organised under the banner of 'RfL Week', (For more information go to Projects).

When Albert Schweitzer was born in 1975 in the Alsace village of Kaisersberg , the region had been French for centuries. However, annexed by Germany four years before his birth, the young Schweitzer was thus a German citizen.

In 1918 - 1940 it became once again French until the Germans recaptured it in 1940 and lost it to the French once more in 1945. Schweitzer regarded himself as a "citizen of the world", but during WWI he had trouble as a German in a French colony and was interned for part of it in a French prisoner of war camp.

The Alsatian village of Günsbach, where his family moved when he was only one year old, was always his European home and it was there that he built himself a house from the money he received on winning the Goethe Prize.

He stayed there between his many European organ concerts and lecture tours, the proceeds of which paid for the running of his hospital in Africa. The house is now a museum and archive of all his manuscripts and his huge correspondence.  It is also the seat of the International Albert Schweitzer Association (AISL) of which RfLUK is a member and to whom we pay  small but regular contributions towards the running-costs of the house.

From 1979 to 1994 Dr. James Witchalls was Chairman of the British Fund and for the latter 12 years of that period he was also President of the AISL.  During much of that time Vreni Mark acted as his secretary and interpreter. In 1987 the first 'Directrice' of the archive, Mlle Ali Silver, died. She had been the younger of the two secretaries who worked closely with Schweitzer In Africa until his death in 1965.  She then returned to Europe and started to build this archive. On her death, Vreni Mark took over the running of the Maison Albert Schweitzer for two years until she was succeeded by Mme Sonja Poteau, who held the post for some 20 years, followed in 2011 by the present incumbent, Mme Jenny Litzelmann.